At St Nicholas church we have 8 bells, all 8 bells being recast and rehung in a new frame in 1957. The bells are widely recognised as being one of the best rings of bells, in terms of ease of ringing and quality of tone, in the diocese.

Since 1957 there has been an active band of ringers at St Nicholas and in the mid 1970’s the band merged with that at St Mary’s thus forming one band to ring at both churches. We currently ring on Sundays for half an hour before the 10.00 service at St Nicholas as well as ringing for the 10.30 and 5.30 services at St Mary’s. We also practice on Wednesdays (7.30 until 9.00) generally alternating between the 2 churches.

At present though we are an ageing band of ringers and could desperately do with some new blood. If any young (i.e. under 60) reader of this would like to know a little more about bell ringing, or knows someone else who does, then please come up the tower when we are allowed to ring again and see what we get up to on Sundays or Wednesday evenings. Bellringing is a wonderful hobby, also doubling as service to the church, so please feel free to come and have a look or contact Simon Rogers on 07498363304.

Recently the team of bell ringers from St Nics came first in a diocesan competition.

This success was followed within weeks by Joshua Warren, age 10, who has been ‘learning the ropes’ here at St Nicholas since January this year with Annie Hall, supported by Jane and Simon Rogers, and has just achieved his Level One Certificate: Bell Handling 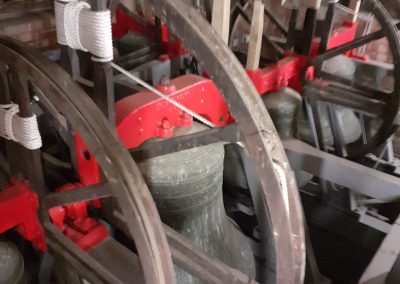